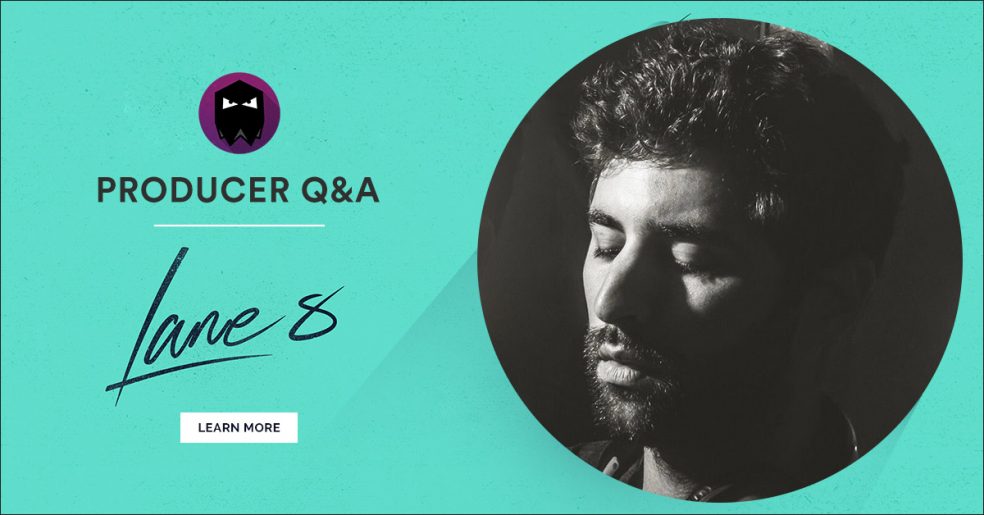 Daniel Goldstein, better known by his stage name Lane 8, has released some incredible music during the past few years. With tracks signed to Suara, Anjunadeep, and mau5trap it’s easy to see why he’s so highly respected within the scene. We managed to get 10 minutes with Daniel to talk about music production, his new record label and what inspires him to make music. Here’s how the conversation went…

Hey Daniel, thanks for your time today. In 2016 you launched your own record label This Never Happened. Is this a platform solely for your own music? Will we see other artists involved in the future?

No worries at all. We’ve actually just signed three new artists to TNH and will be putting out two tracks from each of them on a compilation called “Root to Branch” over the course of August – these tracks are the strongest IDs from my recent seasonal mixtapes and fans have been frantically trying to figure out what the tracks are for months so we’re really excited to get them out there!

So, how did you get into music production?

I started with piano lessons as a kid, then played in garage bands in my early teens before figuring out I could make entire tracks with a keyboard and drum machine by myself – once I made that realisation I was completely hooked, and spent most of my free time in my parents’ garage making tracks. A few years later I discovered Fruity Loops and I think I entered an even deeper level of obsession with creating music!

Where do you draw inspiration from for your music?

A lot of times I’m inspired directly by other music – or if I play a really good show and get positive feedback from the audience, I’ll often find myself really driven to create new material. But other times I’m not feeling particularly inspired and I just kind of force myself to at least try to make something, even just an interesting drum beat or a cool synth sound – which can then create a positive feedback loop that gives me more creative energy. I don’t necessarily have a system that always works, I feel like I have to constantly switch things up to keep myself interested and excited about making music. It’s definitely a challenge.

Probably a track called “Kyrie” by Khaen – an artist who I’ve just signed to my label, This Never Happened. It’s got everything that I love about electronic music, really strong production, extremely catchy and emotional and very unique in character. I think it’s going to be a big one!

One thing I can’t recommend enough is to record your own percussion samples – it’s the best way, in my opinion, to get a unique character and vibe to your productions. So many demos and promos I receive sound flat and uninteresting because they’re all using the same 5 sample packs for their drum sounds!

What piece of studio hardware or plugin could you not live without and why?

I’ve really come to love Serum as my go-to synth, it’s now the first thing I open in a new project as I feel it’s so easy to create interesting sounds quickly, which is really important to me – if I can’t get something sounding interesting in the first 30 minutes of starting a new project, I tend to lose interest and switch to a different project. I have a lot of other favorite plugins for mixing, but I’ve never been super into gear or having the latest software – I prefer to get to know a small handful of plugins really well, this way I know exactly which tool to reach for when I want to accomplish a certain task.

Thanks once again for taking time to speak to us Daniel. We wish you all the best with the forthcoming releases on This Never Happened.